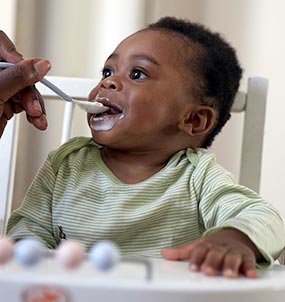 Porridge prepared from sieved maize, otherwise known as ‘Mmori Koko’ in the local parlance has the tendency of getting babies who are fed with it drunk, the Ghana Health Service has revealed.

The pudding that has over the years been the ideal meal for babies due to its easy-to-prepare nature and affordability is made from fermenting blended maize and made into a meal for babies.

But when the maize is kept for too long, it turns into alcohol for these babies, which according to the Ghana Health Service is not good for the brain development of babies, especially those that are getting off exclusive breastfeeding.

This forces the baby to sleep and the result is that the baby misses some meals during the day.

Mothers have therefore been advised not to serve only this porridge, and if they do they do not have to ferment the maize, and ultimately the pudding must be fortified.

Greater Accra Regional Nutritional Officer, GHS, Faustina Vimariba Tour made this known on the sidelines of a media workshop for journalists organized by UNICEF.

The workshop was on the theme ‘Equipping media workers with information to support media reportage on nutrition and nurturing care.

The exercise hosted some 20 journalists from media houses across the capital and had representatives from UNICEF as well as the Ghana Health Service as speakers.

Participants were also taken on a tour of the Children’s unit of the Greater Accra Regional Hospital where they were briefed on procedures at the Antenatal Clinic, Postnatal Clinic, Child Welfare Clinic, and Nutrition Department.

Madam Tour said “…some people will give only ‘Mmori Koko’ and sometimes they over ferment the ‘Mori Koko’ which is the maize porridge and it becomes alcohol. So, when you feed the child with it, it means that the child ends up getting drunk because it is the alcohol you have given to the child, and when the child sleeps, the child will miss the number of times that they’re supposed to feed.”

As to whether there is research to prove any long-term effects of this practice on children, she noted “we cannot really tell the alcohol percentage. but alcohol is not good for the brain development of the child so it has some effects. If it’s something they like, it should be fortified by adding other things to make it rich. Fortify it with groundnut paste, soya, etc
Also, it shouldn’t be very light but should be thick and friendly for the child. Three to four spoons is enough.”

According to Madam Tour, transitioning from exclusive breastfeeding to adding complementary food has become difficult due to the schedules of mothers in the present day.

Research for exclusive breastfeeding shows that the percentage of infants aged 0-6 months receiving only breastmilk has reduced from 52% in 2014 to 43% in 2017.

She indicated “because of how to transit from the exclusive breastfeeding to the addition of complementary food, the reason is that at 6 months, the nutrients in the breast milk is no more enough for the needs of the child. The child is growing, there are some gaps in Vitamin A energy, iron and certain key nutrients so you need to add on food.”

“Some mothers do not have time, so they don’t pay attention, they just want to push the food for the child to be able to take within a certain period so they can move but responsible feeding meaning that you having time to be able to feed the child with love and care. So, the child sees the food as something that is enjoyable.”

“During these feeding times, it’s not just you giving the required nutrient but also building the food habits of the child. If you rush the child to eat fast, the child will learn to eat fast. And also not feeding with one type of food. Everything starts at this age. The child is like a tabular rasta If they [mothers] can get leave from work it will really help and anybody at home should also support.”

“If you force the child, they will see the food as punishment and will begin to hate what you’re feeding. Before they start eating, they will observe the way you eat your food and want to take part in the family foods.”

She explained that “the gradual process is that when you’re beginning, the family food soft that is easy for the child to eat. And the child at that age 6 months, the stomach is just about 200mls so you cant feed so much. You have to feed various foods from staples, vegetables, animal protein, and legumes for the child to get all the nutrients”

Breastfeeding prevents 3,774 deaths of babies each year. It saves Ghana over $5.8 million and generates more than $594 million for the economy, which is nearly 1.5% of Ghana’s gross net income through having a healthier population.