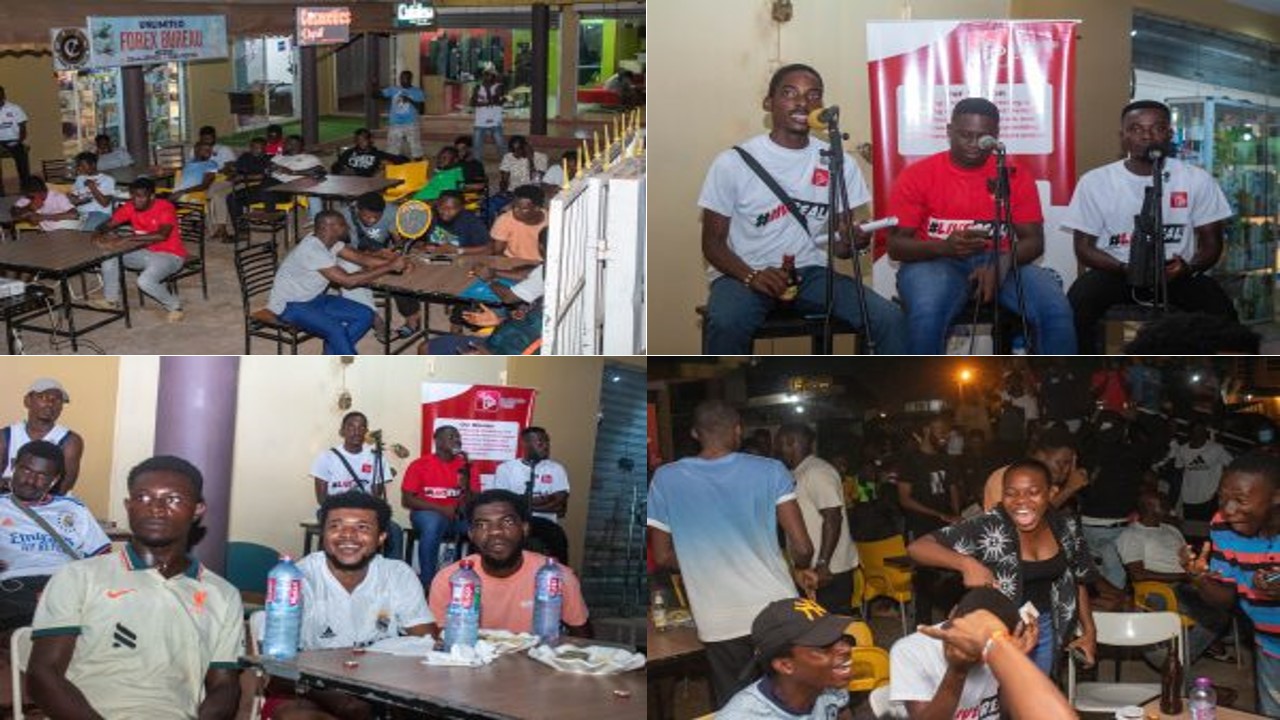 On Saturday, May 28, 2022, Playhaus Radio successfully held its maiden edition of their Outside Broadcast of the UEFA Champions League final dubbed “UCL FanZone” with the #LIVEREAL.

The Champions League final was broadcasted live at Party House Bar and Grill in Adenta by Playhaus Radio spearheaded by the PlaySports Team. Publicity was sent, preparations were far advanced and football-loving fans were poised to be a part of this football’s biggest club competition Final between Liverpool and Real Madrid. The venue was set and all roads led to Adenta – Party house.  Fans of the finalist clubs, football enthusiasts as well as the famous ‘Against Supporters Union’ (ASU) thronged the venue to capacity even before the slated time of the event (5 pm).

Patrons enjoying the live commentary and analysis by the Sports Team

Most of the fans present repped their favorite club jerseys, there were lots of exciting activities such as sports fan quiz, music on the goal, and the jersey challenge, among other things all held as a curtain-raiser to the main event for the day.

Upon fans’ interaction, most people rooted and predicted a Real Madrid win over Liverpool. There present were the supporters of Barcelona, Chelsea, Man City, AC Milan, Ajax, Arsenal, Man United, etc complimenting the Liverpool and Real Madrid supporters for the big night.

The Big Question remained Who Wins? Is it going to be a Revenge or Repeat of the 2018 final?

In his official opening speech, Mr. Emmanuel Appiah the General Manager of Playhaus Ghana Limited appreciated all and sundry. “Thank you all for converging here from both far and near to join in the UCL FanZone final showpiece watch party. It is our greatest pleasure and we [Playhaus Radio] assure to give you the best of everything in terms of sports, entertainment, news and quality advertising among other things”.

Playhaus Radio as part of its vision to become a world-class media and advertising agency have its doors widely opened to welcome all stakeholder, businesses, individuals and groups to contact the station for real, quality and value for money advertising of their products and services. He added.

The PlaySports panel notably, Controversial (Host), Day Student, and Manuel Global gave a comprehensive and in-depth history, form guide, head-to-head, route to the final, match analysis, predictions, and granular digestion of every bit of action that surrounded the game. Nkwantanag Fabrizio (Bismark) and Cooker Anomaa Tan served our cherished audiences with a hot and sumptuous live commentary by the able production of Sports Magician and the Technical Team.

The tensions, anxiety, nervousness, and expectations of the fans gathered heightened as the kick-off time was delayed for 30 minutes.

The fans of Liverpool were in high spirits during and after the 1st half of the game since they were the better side, had lots of goalscoring opportunities but failed to find the back of the net. However, Courtois the safest pair of hands for Real Madrid denied Liverpool from scoring by making some crucial saves. This left the fans of Real Madrid scared and worried until referee Clarence Turpin ended the 1st half to give them some respite.

Fans in High Spirit at the Party House Arena

In the 2nd half, Real Madrid took charge of the game. They (Real Madrid) broke the deadlock through a Vinicius tap-in assisted by Fredrico Valverde in the 59th minute. The Party House arena was activated with deafening noise as fans cheered and celebrated the goal. The goal kept the fans of Liverpool heartbroken, Real Madrid becoming a thorn in their flesh yet again?

Several attempts were made by the Merseyside Reds [Liverpool] to get the equalizer back into the game but all ended in zilch. Real Madrid was able to maintain their lead by the lone goal and saw them crowned winners of the UEFA Champions League 2021/22 season to make it a record 14th time after the final whistle.

Real Madrid fans jammed to some good tunes of music at the event venue whiles the Liverpool fans appeared disappointed and crestfallen.

Fans’ remarks after the event:

“The UCL FanZone is interesting and engaging, the first of its kind to happen here at Adenta and its environs. I wish it is organized every year” – Kwadwo

“Real Madrid is the best in the UCL, Playhaus Radio God bless you for bringing the game to our doorstep” – Eddie

“Party House and Playhaus collabo is splendid, this year’s UCL final has been enjoyed differently. The experience is great” – Kwame

“A friend invited me here to join in the UCL FanZone watch party. I have never regretted coming here. Your team is solid, their analyses are spot-on. Please repeat this next year I believe Liverpool will be in the final again” – Yaw Bot

Link to the full event here. Tap to open https://fb.watch/dm3Pu7hBGg/