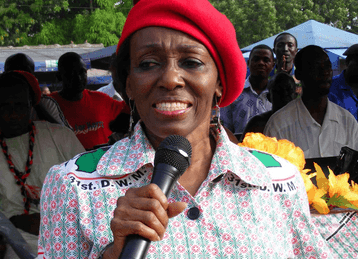 Nana Konadu Agyemang Rawlings, the founder, and leader of the National Democratic Party (NDP), has advocated for an amendment to the 1992 constitution to establish effective checks and balances within government structures.

According to the former First Lady, the portion of the constitution that allows the President to appoint members of Parliament as Ministers, so making them part of the executive branch of government, is defective.

This conduct, she claims, violates the principle of separation of powers.

Some Ghanaians and Civil Society Organizations have called for a reconsideration of the 1992 constitution.

Today, Nana Kunadu Agyemang Rawlings, speaking to the media and NDP officials at the party’s headquarters in Accra, advocated for urgent constitutional reforms in Ghana.

“You cannot have members of Parliament become Ministers, thus I recall writing a memo to the panel responsible for drafting the constitution.”
I received abuse.
But common sense tells me that the two cannot be combined.
“One should be independent of the other so you can double-check each other and ensure things are done correctly,” she stated.

The Commission was also entrusted with presenting a draft bill for constitutional modification in the event that any revisions were required.

However, the Commission’s recommendations have not been implemented even years after the report was given to the appropriate authorities.