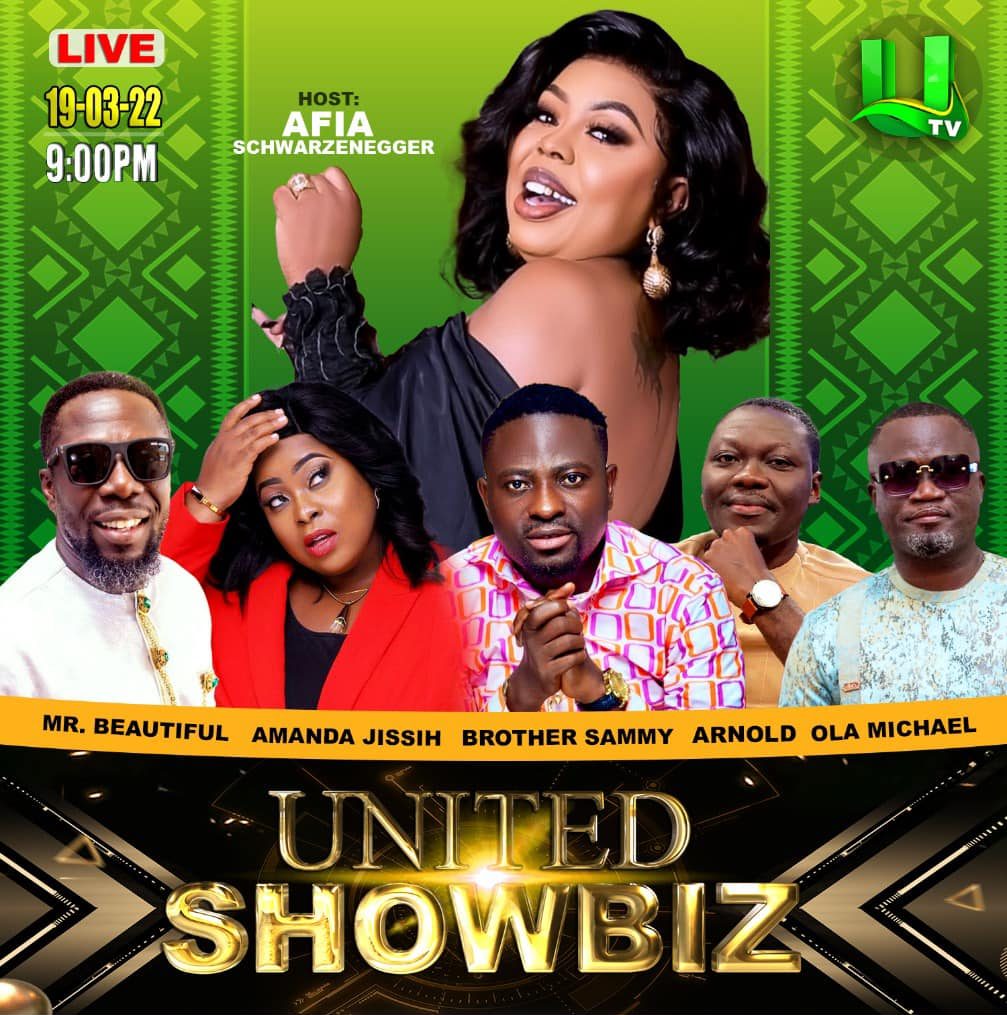 As known, United Showbiz is an Entertainment show on the United television (Utv) every Saturday which begins at 9:00.p.m prompt and is always extended to midnight around 12. a.m. The host, Nana Ama Mcbrown has been away for some time and it’s alleged she’s on a medical break. So management has decided to bring different people from the industry to host the show. The various people who have hosted the show are Yvonne Nelson, John Dumelo, Fella Makafui, Mzbel, and Empress Gifty. Last week, Utv Ghana, made a post on Instagram with Queen Afia’s picture on a flier for the United Showbiz program with the pundits, Mr. Beautiful, Amanda Jissih, Bro. Sammy, Arnold Asamoah Baidoo and Ola Michael. It was captioned, ” You Asked, we listened “.

As controversial as the comedienne, Afia, the show started controversially and ended as such. When it began, the actors and actresses discussed the problems they are facing and Amanda made it point-blank that the government is not making any efforts to help the entertainment (movie) industry so, therefore, they themselves should come together to find various solutions to their problems in order to be able to produce quality movies, series, funny videos, and skits for consumers. They went further to compare the industries in Ghana and Nigeria and they said that much more money is gained from Nigerian producers than Ghanaian ones. Bro. Sammy gave an instance that, upon going on set to work with Dr. LIKEE on a role, he was paid 40 ghc but because he has a good relationship with Likee he took it in good faith. They all laughed over it. Mr. Beautiful also addressed the issue he had with the movie producer, ‘Phamous’. He said that they shot a movie together but when the movie was launched, his picture didn’t appear on the flier and so on. National Problem ( Queen Afia) also chipped in that he, Phamous took a picture with her, and before she realized, he was communicating to the general public that he was on set with her.

Afterward, they moved on to discuss the doings of Abena Korkor and everyone expressed their views. Afia said that if any woman allows what Abena says about their spouse to cause confusion in their relationship or marriage then that woman lacks wisdom. Bro. Sammy added that his wife conceived but had lots of complications so she was admitted to the hospital. While in the hospital, one of the guys he Bro. Sammy and his wife live with went and told his wife that he(Bro. Sammy) has brought in another woman. His wife also believed the guy and now there’s confusion in the marriage. So Bro. Sammy said, “I can’t ever have sex with my wife”.

However, Shatta Wale and their mother’s issue was also raised. Afia made a statement that the mother of Shatta didn’t bring him up well, she used herself as an example that despite her behavior none of her children has ever done anything bad even on social media because she trains them well even as a single parent. She also said that one time she visited her mum with her friend, Tracey Boakey and her friend gave her mum 2000 ghc but when they were about to set off her mum asked her for money again so Shatta should take care of his mum no matter what.

Thereafter, the most anticipated topic came up, which was the death of Afia’s father and the rising issues attached to the transition ceremony. She stated categorically that ‘cancer’ killed her father and according to her she knew her dad was going to die. The funeral was held in Kumasi, KNUST. Afia said for security reasons she employed a Military Band, therefore, denied over four different free bands. In one of the scenes at the funeral, we realized that she slapped a certain young man which she explains was because the guy assaulted her elderly sister by squeezing her arm to pick money from the ground. The guy said he was part of the band, meanwhile, he says he’s not a soldier and the military band doesn’t consist of civilians either. Afia said if the military police don’t arrest the guy, she will sue them.

Queen Afia ended the show by thanking the management of Utv and the show, viewers, and close friends who helped in her father’s funeral arrangements like Tracey Boakye, Diamond Appiah, Bro. Sammy, Dr. Kwak Oteng, Prophet 1, Chairman Wontumi and many others.