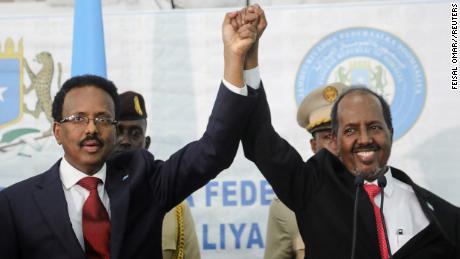 Hassan Sheikh Mohamud, Somalia’s former leader, has been chosen president in a final vote limited only to the country’s MPs.

He defeated the incumbent president, Mohamed Abudallahi Farmajo, in 2017.

Due to security concerns about holding a larger election, the poll was limited to Somalia’s 328 MPs, and one of them did not vote.

Three MPs are said to have tampered with their ballots.

The peculiar circumstances illustrate Somalia’s security challenges as well as the country’s lack of political accountability.

The outcome represents a comeback for Hassan Sheikh Mohamud, who served as Somalia’s president from 2012 to 2017, until being defeated by Mr. Farmajo.

The elections, which were highly contested and required a third round, were postponed for about 15 months owing to infighting and security concerns.

Mr. Mohamud was sworn in shortly after the final results were revealed, igniting cheers and gunfire in the capital.
He will be in office for the next four years.

Hundreds of legislators cast ballots on Sunday at a secured aircraft hangar in Mogadishu’s capital.

Explosions could be heard close as voting took place, but no casualties were reported, according to authorities.

Mr. Mohamud, as the future president, will have to cope with the consequences of a prolonged drought, which the UN believes puts 3.5 million Somalis at risk of severe hunger.

But the most difficult task he faces is wresting control of much of Somalia from Al-Shabab.
The al-Qaeda-linked Islamist extremist group still controls vast sections of the country and conducts frequent attacks in Mogadishu and elsewhere.

The country is also being impacted by food and gasoline inflation caused by the Ukraine conflict.