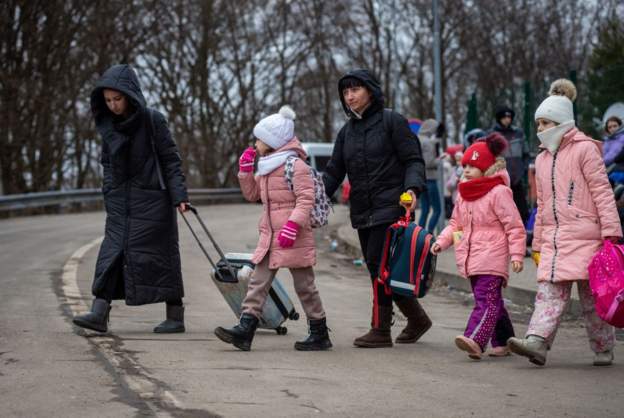 A massive exodus has begun from Ukraine towards multiple western borders – from Poland in the north, to Moldova in the south.

Most of the thousands who manage to cross the borders are women and children exposing their vulnerability.

Since midnight on Thursday, men of military age, meaning between 18 and 60, are being told they should stay and fight. Those on the road say they were running for their lives.

One destination for Ukraine’s fleeing civilians is the border with Hungary at Beregsurany, where most of those crossing are on foot, mostly women and children, and mostly ethnic Hungarians who are also Ukrainian citizens – the Transcarpathian region of western Ukraine has a 150,000 Hungarian-strong community.

Eva, 44, got a ride to the border from her village of Borzova, 12 km away, then walked into Hungary with her children Eniko, 11, and Richi, 14. Her husband works in Budapest. They wait in a little huddle at the roadside for him to drive out and pick them up.

“There’s a mood of panic in our village. People gather in streets and set out for Hungary. There was also panic buying in the shops.

“We’re afraid the Russians will occupy the whole country. That’s one fear. The other is that we are afraid our men will be conscripted.”

By a buffet at the roadside, a group of six or seven young men, all ethnic Hungarians, stand around looking lost.

They crossed on Thursday. Did you think about staying and fighting? I ask.

“It’s a war between Ukraine and Russia,” one shrugged. “It’s not our war.”

K. T. Hammond is the new trade minister, and Bryan Acheampong is the new agriculture minister

After meeting with Mahama, Muntaka accepts a reshuffle in Minority leadership